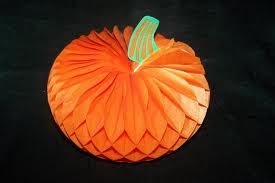 Spent the evening with my sister's family, carving pumpkins with the kids. Paul had to leave early to get some writing done, but I stuck around. My sister, Moira, and I ended up puttering--ordering vitamins online, going through old costume jewelry, untangling the chains and trying to figure out where it came from and if it should mean something.
As I untangled, she was telling me how her youngest, Solea, at age five already a maven of style and a total society girl, had complained about their lack of Halloween decorations. "Mommy, can't we have at least three decorations?" She had asked. Moira and I laughed, but she admitted it was sad that we don't really get into the festive trappings of holidays.
The conversation reminded me of when we were kids. We didn't have many decorations...but for Halloween and Thanksgiving, we had these tissue paper honeycomb centerpieces. My dad must have found them--he was the one most likely to wander about a store with no agenda, then suddenly take something in hand, saying "now this has character," in a way that made me think the very best thing an item could have was character.
And suddenly I had a very vivid image of sitting with him at our dining room table, watching as he "assembled" the honey comb jack-o-lantern. He was very good at such things, very focused and quietly confident as he pulled the layers of tissue into a circle, and carefully attached the ends with the clear plastic clip, being careful not to crush or tear any tissue. There was a jack-o-lantern that looked like the pumpkin pictured here, but which also had cardboard eyes, nose and mouth, with a straight back piece that you could fit into the slots of the honeycomb, and he would carefully position these as well. For Halloween there was was also black cat who sat upon the mantle, and at Thanksgiving, there was a turkey very similar to the one pictured below. My father remembered things like decorations, and didn't forget them for months at a time as we do at our house, where a stray Christmas ornament remains so long that it becomes a permanent part of the decor, no longer noticed. My dad liked to put up the Christmas tree two weeks before the day, and take it down soon after New Year's, so I imagine the cat, the pumpkin and the turkey had similarly appropriate seasonal lifespans.
I remember having a happy feeling when I looked at our decorations, and having a sense that the season was somehow special, and different from other parts of the year. The tissue was so colorful and delicate, it filled me with a kind of awe. Maybe it is only in looking back that I give my younger self a sense of awareness of time was passing, and a kind of prescient nostalgic appreciation of these reminders, knowing that they were only temporary, and that someday they would be gone.