Paul will be directing his first feature length film in less than a month!

This is a big announcement that doesn't feel quite as big around here because it's been in the works for awhile. Sometime last year, a friend, Sheri, who produces independent films, approached Paul. Her company (comprised of herself and her husband) had a potential deal to make a film and they were looking for the right project to pitch. They asked Paul to come up with a list of log-lines. Paul gave them a list of ideas--his own and also those of some friends he invited to submit. In the end, none of them were what the other party was looking for, but one of them, ROCK JOCKS, intrigued Sheri. She asked Paul to write it to be made for a really low budget, and she would keep an eye out for an opportunity. Paul spent the next several months working on the script, and eventually the opportunity did arise. One thing led to another, and now casting is in progress, a set is being built, and shooting is scheduled to begin on March 17th!

I am super proud and happy for him, and he is excited too--at the same time that he's nervous. No one wants to mess up a big opportunity! He's also been busy and stressed juggling his pre-production duties with his day job, which he finally and reluctantly had to leave this past week in order to devote himself to the film full time. No movie gets made without an alternating series of lucky breaks and heartbreaking setbacks, and this one is no exception--but there are some exciting possibilities being discussed in terms of cast and crew--and as soon as contracts get signed, hopefully I can talk about them here.
Update: Yesterday I got to go see the stage (warehouse) where the production office and sets are both in early stages of assembly, and took this blurry picture on my phone. The pink sign says ROCK JOCKS. 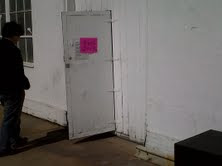 Posted by Barrington at 8:56 AM