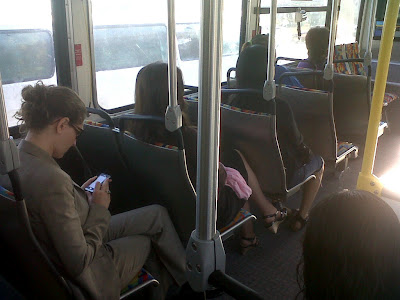 On this one particular bus, the 728 going east a little after 8am, I often have to sit sideways. I don't prefer to sit sideways, I prefer to sit facing front, but for some reason, this particular bus has a high percentage of women passengers who take the aisle seats, then put their bags and purses on the window seat, and then avoid the eyes of anyone coming up the aisle, saying, in not so many words but pretty clearly, "I don't want you to sit here." It also sounds like they are saying "I think I am better than you, and so I don't want you to sit here," which vexes me. What is this, elementary school? And, hello, you're riding the bus in L.A. I'm a big proponent of public transportation, really enthusiastic about the concept, but I have a grip on reality. If you take public transportation in Los Angeles, unless you are an eccentric millionaire masquerading as a homeless person, you are poor. At least poorer than your co-workers who pay to park their cars in a downtown parking structure. We're all kinda in the poor boat (or bus) together, so what's with the putting on airs? This kind of behavior irks me. Especially when the bus starts to fill up, and they still won't move.

But maybe I'm misinterpreting. Maybe these women are really saying something else, like, "I have an uber contagious disease, and I don't want you to catch it. I'm looking out for you."
Posted by Barrington at 11:23 PM