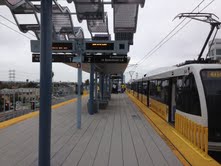 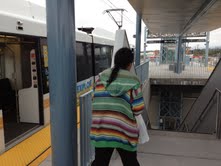 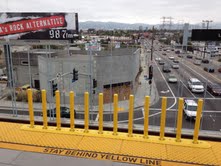 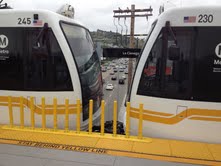 If you know me, you know I am a big fan of public transportation, and that I hold the idealistic view that a good public transportation could change the face of Los Angeles.  The new Expo Line is the first train to connect the city going east-west.  Eventually it is supposed to go all the way from the Santa Monica (the city closest to the ocean) to downtown LA. 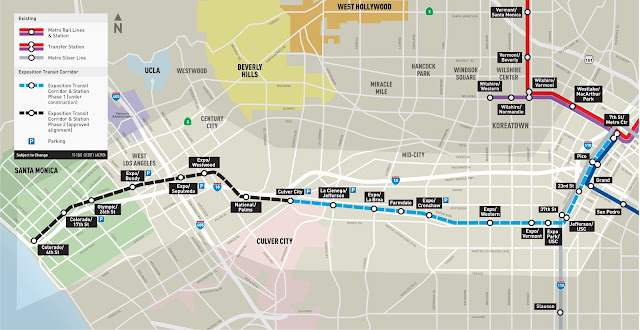 It is also the first train that has a stop close to my house, and another close to my work, so you can imagine that I was excited to try it out.  At this point I should say that although I am emotionally pro-train, I am not pro-train-at-the-expense-of-buses.  People need to get within a couple blocks of their destination or they won't (or won't be able to) use public transportation.  It does greatly diminished good to transport someone 16 miles in 25 minutes by train, if upon arrival, there is no bus to take them the last mile.

Case in point:  The bus I currently take to work, the 550, has for months been the subject of rumors. They say that because of the new Expo Line, the 550 will be discontinued in June, when the routes are revised.

Currently, my daily routine is to walk the four blocks to my bus stop, get on the bus, and ride it to within a block of my work.  So last Monday,  along with the thrill of riding a train, I was also conducting an experiment to see how I would fare without the existence of my regular bus.

I walked the same four blocks to the corner, and took the 780 down Fairfax.  Although I'd never taken this particular bus before, I knew it went to the Metro transit hub just north of the train station. Since they call it a hub--I assumed that with the opening the station, the buses would now loop around there as well--increasing the "hub-iness." Not the case! I found myself on a busy corner, waiting for yet another bus.  I thought about walking, but as I was not exactly sure where the train station was, or if there were sidewalks to get there, it seemed safest to wait.

In the end, taking the train took twice as long as taking the bus, and although I am lucky enough to have an all-you-can-ride pass, this is often not the case.  Metro does not offer transfers, so it would have cost me three times as much to use the train: $4.50 instead of $1.50.  That's one way--so $9.00 both ways. I could easily drive to work and park for less. Had I been a new rider of Metro, the overall experience might have just confirmed all my preconceptions about how it's not worth it.

LA Metro if you are reading this:  I know that money is an issued, but please do your best to maintain your routes.  When you change your routes, try to feed them to your new train stops when possible.  Offer transfers so that you reward your more frequent riders instead of punishing them and making them look for other alternatives. I'm a supporter, and I want to tell all my friends that you are awesome so that they will use you...but I can't do that until you are actually awesome!

Posted by Barrington at 7:14 PM