We Had A Party!

Last Saturday was my birthday, for the first time in many years, I had a party.  (I might say"we" had a  party, but Paul insisted on referring to it as "B's party" for most of the preparation period.) I used to entertain more frequently, but since returning to Los Angeles a few years ago, life has seemed to fly by.  I was too busy with school when we moved in to have a housewarming party, too busy with work by the time I graduated to have a have a graduation party.  Birthdays seemed always overshadowed by deadlines of various kinds, Paul's movie left put him in constant worry.  But this year, my birthday landed on a Saturday, Paul's film was finished, my rewrite is long out the door, and, well, I could be dying from cancer, but I'm not.  Oh, and there was a rumor that the world might be ending in just a couple weeks. If it wasn't time to have a party, it never would be.

I had the house cleaned in the week prior, and stayed up late with my mom making tasty treats to serve.  The day of, she helped me shop for things that would not have fit in the fridge, and Paul re-arranged the furniture and made the lights look pretty as I knew he could and had warned him I would expect.  I researched recipes for hot cider and wassail drinks, and borrowed extra slow cookers so that I could brew different variations (vodka spiked, rum spiked, and virgin).

Two hours before the party, the downstairs neighbor came home and offered us all the leftover desserts from the party she had thrown the night before for her teenaged daughter.  My downstairs neighbor is an event planner / PR person--so the set-up for her teenage daughter's party was far more sophisticated than everything we were putting together--there were matched, brocade christmas linens on the tables, a buffet of steamer trays, desserts on risers--and a chocolate fountain.

The party was well-attended and, I think, a success.  Although I over-prepared and over-shopped and had a few moments where I questioned the wisdom of the endeavor, I did not feel overly anxious.

In the future,  there are a few things I might do differently.  I would invite people using other methods besides Facebook, and I would issue a reminder--as we received a few disappointed, (and I believe in most cases, sincere) messages from those who had missed it due to Facebook hiatus or had let the date slip by.  Also, I would take some pictures of the party--of the people who were there, and our house looking beautiful--or at least better than usual.  As it was, only two pictures were taken by a guest.  Here, my friend Nikki partakes of the chocolate fountain outside in the courtyard. 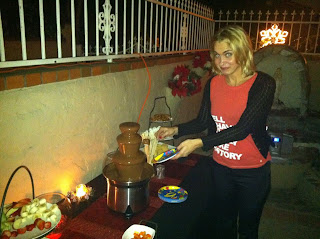 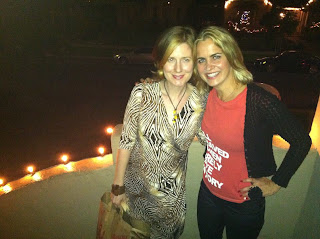 And here is a picture of us on the landing. (I include it so you can see my new dress.)


These pictures are after the fact by a few days--
the foil swirly things I hung in one of the rooms. 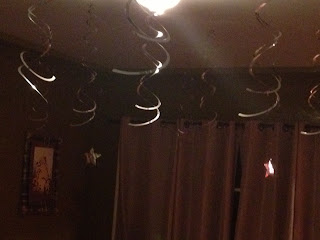 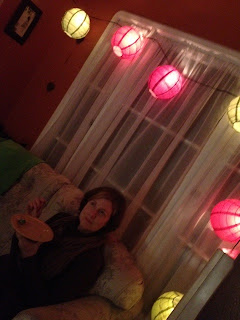 And me, eating old cake in the sun-room lit by lanterns.

We also had string lights and these cool fiber optic lights over the "dance floor."  One fell to the floor with a thunk, scaring the house guest sleeping on the couch the other night.

After the party, Paul congratulated me and said it was very nice, that he felt bad for not having faith--and that maybe next year he would even invite people he knows that aren't on my Facebook.

Maybe next year I'll have another one.

Posted by Barrington at 4:11 PM