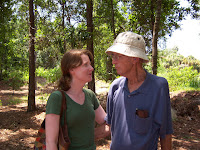 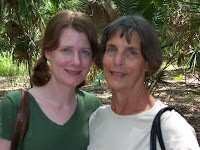 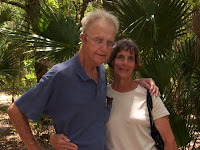 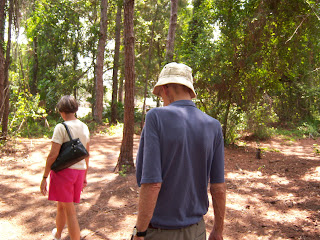 Wednesday night, as Paul and I were listening to a Q and A after a movie, our phones flickered with calls from my brother, who was visiting my parents in Florida. Paul and I looked at each other and wordlessly slipped past the row of people into the lobby. It was after 1 AM in Florida, so even as I dialed my brother back, I already knew, my father had passed away.

The hospice workers believe (or maybe they just tell you to make you feel better) that a person has a certain amount of control over one's death, and that if a person wants people there, he will wait, and if he doesn't, he will wait for that, too. My father died a couple of hours after my mother and siblings left for the evening, and during the twenty minute period between check-ins from the hospice worker.

Another thing people who work with the dying say, is that they will often see their patients, in the days before their deaths, looking into empty spaces, their eyes following things unseen. Some believe they are seeing angels. As a quasi-Buddhist, I have a very loose definition of angels, but I hope my father had some help in his transition to another plane of existence, I hope he felt he was moving toward something as well as moving away. I hope he did see angels.

Having visited so recently, I didn't go to Florida as it became clear things were coming to an end. I offered to help my sister with her kids here while she went because I wanted her to have the opportunity to see him again. My dad and I had a few good, honest moments when I visited, and we said a real, very heartfelt goodbye when I left, so I have no regrets on this point. Still, it has been a odd week, filled with early mornings, precocious questions from a four and a six-year old, and making peanut-butter and jelly sandwiches, intercut with reports via telephone. Sometimes the change in circumstance seems remote, as I laugh with my friends or play with the kids. And then, in a quiet moment, I find myself sobbing.

There will probably be more on this topic in the future, but for today, I thought I'd share these pictures from my visit a few weeks ago. The photo of me and my mom is a tiny bit blurry--my dad was unsteady when he took it. The picture of my parents I am glad for. We are not a particularly photogenic lot, so a good picture is a lucky one, and here my father looks very much like himself. His gaze looks focused, his bemused smile will be familiar to those who knew him.

The one that I cannot help loving on an artistic level is the last one. It is the last picture I took, or will ever take, of my father, and for me it captures so much of this moment in our lives--I can feel the connection between my father and my mother, their determined and studied commitment to their path. I see the sharpness of my father's shoulder blades beneath his shirt, his concentration on the ground beneath his feet, the way he dominates the frame, even as he prepares to walk out of it forever.
Posted by Barrington at 10:38 PM