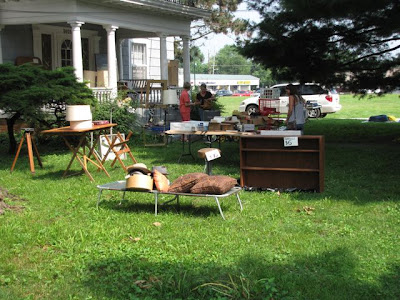 At my mother’s yard sale, the professionals automatically knocked every price in half or less. “Would you take five bucks for that?” a woman asked my mom, pointing at the fifties floor lamp with floral shade. Yes, she would. A man took a handful of wrenches for three dollars. The woman looked at the tripod. Fifteen bucks for the tripod? I shook my head, I’d seen it listed for close to $300, we’d try the antique mall if it didn’t sell.

Then a man showed up, said he collected and refurbished cameras, did we have any? My mom brought out my dad’s old Nikon. What would we want for it, the man wondered. We replied we just wanted a fair price, that since he was a professional, maybe he should just let us know.

What did he mean? “I don’t know what it’s worth and you say you do. You won’t offend me,” I reassured him.

“I don’t want to offend you,” he repeated and again refused to name a price.

"Uh... Okay." I looked up the Nikon online and saw several camera bodies priced around 120 dollars. I showed him. “Maybe $50 bucks with the lens would be reasonable.”

He pointed out how our lens wasn’t the matching lens, how the mirror was sticky. I looked up a trouble-shooting site that claimed a new battery could solve the mirror problem. We finally reached a price of $50, including two lenses and a battery still in the package.

At the end of the day, roughly half of our items remained. We hauled them back up to the porch to protect them from the coming afternoon rain.

The next day took the few items I had selected for special treatment to the antique mall, a series of stalls owned by different vendors. Items could be purchased at a main checkout area, so only a few vendors were actually on premises. Two of them, a man and a woman, followed us out to our car. I opened the trunk. They looked at my grandfather’s hats.

They said. “What would you take?”

“You’re the people who have to sell them, I said—you know your mark-up, your rent. What are they worth to you.”

“We don’t want to offend you," they said.

In vintage stores in Los Angeles I’ve seen similar hats for twenty or thirty dollars apiece. “I tried pricing them at ten dollars.”

“But they didn’t sell, obviously.”

“Well, ten dollars for the lot…we have rent, and floor space.”

The man started to hand them to the woman. “Oh," she said to him. "I thought you wanted them.”

An awkward moment as I put the hats back in the trunk.

“What’s that?” asked the woman.

I pulled out the tripod with varnished expandable oakwood legs, and the large metal plate on top. “It’s a large format camera tripod.”

“What would you take?”

“It was over two-hundred online”

“I could never sell it for that here.”

“I understand. You know your business, make a reasonable offer.”

I was getting a tad fed up with everyone's deep concern over my sensibilities.

“What would offend me? Are you going to offer five dollars or something?” I chose the number because it was ludicrously low. Offensive even. Not noticing—or perhaps she did—my tone of voice, she jumped on the number. “Yes, I’d pay five dollars.”

“I shook my head, and started to put it away. Maybe it’s worth putting on eBay.”

I was leaving the next day for California. My mom was tired, and even after all our efforts, we had only made a slight dent in the mountain of material goods. “It’s up to you, mom.”

My mom took the money. The antique lady looked at her new possession.

“Huh, interesting. I think I’ll take it home to my dad.”

She wouldn’t try to sell it in town, I realized, she had other venues, and could do much better elsewhere.

It wasn’t until we drove away, that it began to dawn on me. “Not wanting to offend,” was not about not offending me. It was simply an opening gambit in a game. Whoever said a price first was at a disadvantage. Both the antique lady and the camera guy had worked from the first price out of my mouth. When I started at fifty, we'd ended up around fifty. Saying “Five dollars” despite the sarcasm, had set a range. We both knew—she, in the moment, and me, in retrospect—that I’d made a bad opening play, but there was no coming back from that, only walking away, which because of my mom, I’d been unready to do.

I was frustrated with myself. A big city girl back in a little town—and still so naïve. Still so rigid in my Midwestern, middle-class values. After all this time, still clinging to the belief that things have a value, and if you are a good person, you charge or offer something commensurate with that value. Still hoping that somehow that “the man” will pay me a fair wage for an honest day’s work, because it’s the right thing to do and not just because I have him over the barrel. It seems stubbornly, self-sabotaging to insist on being a “straight-shooter,” and regarding car-dealers as inherently slimy because instead of pricing their cars, they bargain. They give strong, better-informed bargainers better deals and take advantage of weak bargainers.

I have to see my failure as a bargainer manifest in the real world. I’m working three days a week for free, and the rest of the time for eight bucks an hour using decades of accrued knowledge that once garnered me four hundred dollars a day. But these employers know that I don’t want to walk away from the deal and they are willing take every advantage of that. They are companies worth millions, but my judgment that they are just car dealers at heart doesn’t hurt them in the least.

Before I left town, my mom and I went to the scrap yard with out plumbing fixings, copper tubing and fifties-style metal TV trays. The lot was full of trucks full of scavenged tin cans and scrap metal, the men—and they were all men—were scruffy and sweaty, with sunburned necks and baseball caps. They threw our meager offering of metal onto the large scale and issued a ticket based on the day’s metal values, which we took to the cashier. As I stood in line, waiting to cash in, I though how ironic that, despite what could be termed "rough company," I was in at the scrapyard, of everywhere I’d been in the past few days, I felt most at home here. Someone else, bigger than all of us, had set the price, and there was no haggling to be done.

Am I aware that the "someone else bigger" is still some big organization or corporation that I don't understand? That I subconsciously align myself with the scavengers--the people with less power instead of more? That this,too, is reflective of where I set my own worth in the market place, and says all kinds of things about the difficulty of ever escaping one's earliest socio-economic beliefs? Am I aware that I should probably be reading some self-help books on the subject? Yes. Yes I am.