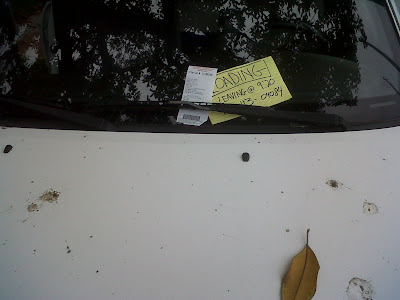 One of the reasons I take the bus to work is that I have bad parking ticket karma. Of course, I live in L.A., so maybe that means I'm just asking for it. If I want to park my car in peace, I should move to a Dakota.

Today, instead of taking the bus to work, I drove my car, because I wanted to give four file-boxes of office supplies we've collected to a local elementary school to use in the classrooms.

I pulled up outside our building and we loaded up the car. I went inside the office one last time to call the school and tell them we were on the way. When I came back outside, three minutes later, I had this ticket. Fifty bucks.

City of Los Angeles tickets irk me because they are over-zealous and often unfair, but I know that, like an irresponsible teenager the City is shitty at managing its finances, and thus needs to extort money from its citizens. USC on the other hand... Didn't somebody give them another hundred and fifty million just last week?
Posted by Barrington at 4:40 PM