This Week at the Office, or "Not loving the smell of formaldehyde in the morning"

At work on Monday afternoon, I spent six and a half hours single-handedly doing this: 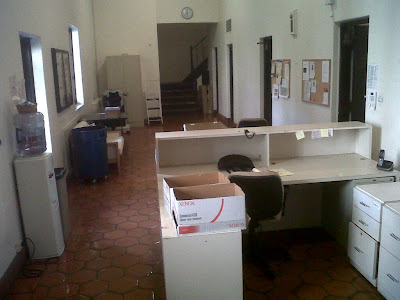 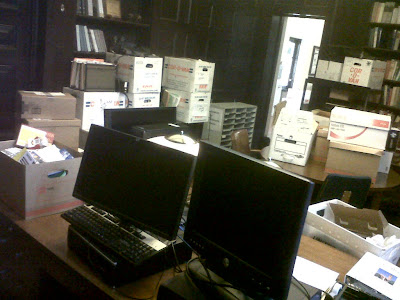 So that on Tuesday, they could do this: 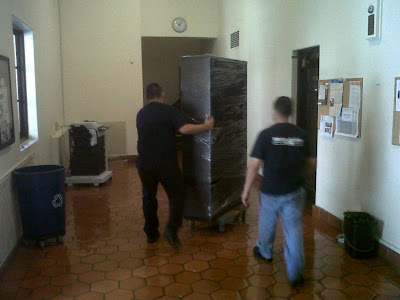 The new furniture is all match-y and stuff. When it's not still covered in boxes, I'll take a picture.

I think it looks nice, but unfortunately an entire office of new laminate furniture smells like new furniture--i.e. it smells like what is probably formaldehyde with some pine scent thrown in. I have a sensitive respiratory system, and because of my defective repair gene and all, I'm kind of paranoid about ingesting and inhaling toxins. I'm already not a fan of how close our building is to a busy roadway, or the amount of fumes that I'm now exposed to on my daily commute, which consists of standing for many minutes at high-traffic intersections before getting on buses that constantly stop and open their doors at other busy intersections. So adding to my carcinogen load has not been at the top of my list of things to do. Was I just imagining my headache and burning eyes by the end of Wednesday and Thursday or were they real? Were they due to sitting at my new desk, or just a result of sleep-deprivation and PMS?

Because I'm generally a people pleaser, I hate to be the annoying Debbie Downer who points out, everytime someone walks in the door, happily takes a big breath and says "oh, it smells so GOOD in here," that in modern times, GOOD is what POISON smells like.* But I have been making it a point to open all the doors and windows in our office to vent the good smell. Unfortunately, all the doors and windows open onto our beautiful courtyard, which is equipped with no less than eight benches with concrete ashtrays next to them. More than any other place on campus, this courtyard implies that one should sit, gaze at the pretty fountain, and smoke up a storm.

At the time of my cancer diagnosis, I was going to an applied art school in Australia and had just declared printmaking as my emphasis. My work showed potential, and I LOVED doing it. I woke up in the morning excited about going to the studio, even when I wasn't feeling well. It gave meaning to my days. After my surgery, I only went to the studio to clean up my supplies. I still have several unfinished plates that haunt me (all my unfinished creative projects haunt me.) I could use turpentine alternatives and non-toxic inks (that were never quite as good as the real thing), but almost any studio is shared. Potent cleansers are needed to clean the silk screens and resin dust is needed to coat metal plates for etching. I left because I couldn't feel safe there anymore. Because my surgery scar was still fresh and everyone was still shocked and scared by my close call, this didn't seem like a militant move, it seemed like a no brainer.

I decided my new creative outlet / career could be writing (structured differently, this blog post could be called "how I chose to become a writer"). It seemed a good answer for someone living with compromised health. I could do it from home. Writing wouldn't have fumes, like art, and it wouldn't have the high stress and long hours of my former work in event production. Working from home, I would be able to control my diet, make fresh veggie juices three times a day, and exercise.

Cue Alanis Morissette song having to do with irony here, sung by the girl who hasn't juiced in months, worked out in weeks, gone to bed before 1 am in years.

Day to day, I'm not unhappy. My life has structure, part of me thrives on busy jobs, and deadlines, but there was a time I promised that I was going to take care of myself, and I have to admit that I've compromised on that quite a lot. The addition of one more element--like bad air-- kind of throws the whole picture up on the screen, and makes me have to look at it again.

(*Know what smells good to me? The smell of lighter fluid on charcoal briquettes. This, in my childhood, was the smell of a cooked-out hamburger. It was the smell of happiness. I'm sure that's in no way related to colon cancer twenty years down the line, but just as an example of things that smell good that are not good for us.)
Posted by Barrington at 9:10 AM