“Tomorrow we make you a tour of San Jose. Amber will come by for you in the morning.”
This is what H said to me yesterday.

I awake and immediately set to work on my presentation notes, worried that the day will be consumed by the tour and meetings. At 10 AM I look up and realize I’m hungry. Will the woman named Amber show up right at 10? I decide this is unlikely and it is safe to risk a short foray to find something to eat, though I leave a message with the reception desk on my way out. The hotel is located on a pedestrian mall, and I walk for several bl 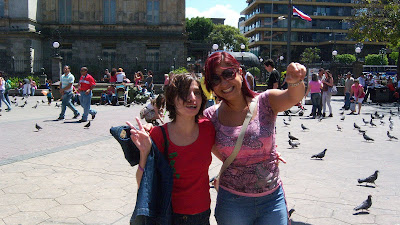 ocks but find nothing but fast food. Not wanting a breakfast burrito from Subway or Burger King, I settled for a pastery from the bakery at a small supermarket. It has a flakey crust and a only a disappointing dab of chicken inside, but it will tide me over.

Back in my room, 11AM comes and goes. So does 12 PM. I decide to give up, and go out on my own. But as I pass the reception desk,the attendant holds out a note: Tattiana and Micheala are coming for me. One is wearing a red shirt. I should meet them at the Plaza Cultural at 12:30.

The Plaza Cultural is 30 seconds from my hotel, so I arrive early. I decide to try my luck at an ATM with my bank card I got from the USC credit union at USC when I signed up three years ago. I’ve been thinking of possible passwords I might have chosen—and hoping the ATM won’t eat my card if they are all wrong. But then, as I am nestled in the glass alcove, away from the traffic, looking at the glowing screen, another number pops into my mind.

I punch it in.

I pull out some cash, and feeling flush and still hungry, I make my way to a storefront alongside the Plaza and order a churro. I’m told I have to order four, so I do, thinking I can share them with my new friends when they arrive.

12:30. After a few minutes, I approach two women , one of whom is wearing a red blouse, and I ask if they are Tattiana and Michaela. They look at me as if I am crazy. I guess they are not. A cel phone would make all of this easier, but I don’t have one yet. I ask someone to help me make a call at a bank of pay phones. Tattiana answers and tells me to wait a little longer—until 1 PM.

1:15. They arrive. Tattiana has hair dyed a magenta highlighted red, Micheala is smaller and darker with a different accent. They are starving, says Tattiana, and they need to go to the bank. I earn some points by producing the two now-cool churros and a few basic Spanish sentences.

“Oh you speak some Spanish, I had no idea what we were going to do.”

It soon becomes obvious that there is more that I can’t understand than what I can, but we manage well enough—standing in line at the bank, I find out that Michaela is from Argentina and has been staying at Tattiana’s house, which seems to be in a suburb of the city, a place she describes as “more rural, more beautiful,” than San Jose. Last night they stayed up talking late into the night like a couple of “brujas” they tell me, laughing. Tattiana has a teenage son, and I glean that he is at home, and she doesn’t like to leave him home alone. I can’t figure out when and how today’s plans of touring me around have come to include her. How did Amber at 10 AM become Tattiana at 1 PM? I have a feeling it has to do with H, and that, although friendly, Tattiana has been a bit inconvenienced by having to come into the city on the bus in the middle of her Sunday to entertain me. It is only a feeling though. My Spanish is not good enough to phrase these questions in a way that won’t elicit polite lies. She finds us a Soda—a restaurant that serves typical Costa Rican food—not fancy, and not expensive. We each order a Casado, which means “married” and is a combination of foods—in this case, beans, rice, egg, salad, cooked bananas and a drink. I’m very happy with the choice, and vow to eat at these places as often as possible during my stay. During lunch, Tattiana’s phone rings. She answers, rolls her eyes, talks fast. I intuit that the caller is H, she tells him we are having lunch, and where. I can only guess at what is happening, but I think he is worried about the place, whether it is not nice enough, and that maybe she is saying that we are where she can afford to eat.

As we leave the restaurant, Tattiana asks me how long I am to stay at the hotel, and I tell here that H has said I will be moving the next day, but I don’t know where. She says I should come and stay at her place. She wants all the girls to come to her place. It will be crowded, because the house is very small, but outside is more beautiful than here, and it would be fun to have all the girls together. I have no idea what other girls she is referring to, but I say that sounds fine, and am relieved to have plan.

After lunch we walk to a Cultural Center, where there seems to be some kind of festival happening. We listen to a man sing for awhile. The topic of his songs seems to be political. They are lost on me. After a little while Tattiana escapes to have a cigarette. I look at Michaela. “Are you happy, or bored?” I asked. She chuckled and nods her head. We leave and wander through a nearby park. Tattiana says we are meeting with H at 5:30, after which she and Michaela will head home and H and I will go to dinner with some other people. It’s only 4 PM. I wonder if they are just babysitting, until I can be handed off. If so, I’d prefer to I return to the hotel, nap, and meet H on my own later. But I don’t know how to ask any questions that contain the word “if”. This requires a conditional verb, and I don’t know any. Eventually I gather, however, that they need to talk to H as well— many plans have not been articulated yet.

At a café, w meet with H and production designer name Runcel—he is Costa Rican, but has spent the last ten years working in Germany. They talk about make-up workshops as part of the feminist objective—this talk is fast and vehement, and I don’t understand the who is on what side of the controversy. Finally, the conversation turns our the upcoming plans. H says my workshop on the 9th at the university has not come through, but that he is still trying to put another location together for this day. I am secretly relieved, and tell him the second workshop can be just three hours, like the previous day. He says there are six reservations so far for my workshop on the 8th which will be at a place called CENAC at 2PM. I ask, as I do every time the opportunity arises, if a projector and a whiteboard have been arranged.

And, I ask, if it’s true that someone named Coral will translate?

H thinks, Coral might have a workshop of her own. There is another girl, Silvia, perfect English—who might be better.

Tattiana tells Horacio about her idea for the women to stay at her place, which spurs more conversation that I can’t understand—about buses and taxis and transporting our luggage. H explains to me that the café we are in is attached to the Teatro Salazar, which is where everyone will be tomorrow, setting up for the big show that will be followed by a gala party on the stage afterwards. Tomorrow I will check out of my hotel, and take my bags for the day to another hotel, which is where the group who has been to the Caribbean will be staying. He says I can leave the bags with one of the rooms of girls, get dressed there in the afternoon for the gala, and later move to where I will be staying. He says he thinks maybe staying with Tattiana is not the best, because her place is small and far away, but he does not volunteer any ideas for another place. Our group breaks up, and once again, dinner seems to be forgotten. I am tired, so not sad, although I am again a little hungry. Maybe that will be my state for much of this trip. Since I don’t have to come up with additional material, I devote my last waking hours to piecing together an employment history for my job application. Before I fall asleep, I check Facebook, and am surprised to see a post from H saying that our International Meeting in the Caribbean might have to be canceled, because people can’t come. This seems sad, since I have scheduled five extra days to accommodate the trip and the meeting, and I was looking forward to it, but for the moment I am too tired to contemplate it. I know that everything can change tomorrow.
Posted by Barrington at 7:12 PM