Monday morning--the day of the "big gala," I wake early to make a trip to the nearest ICE office. Pronounced “ee-say,” the letters are an acronym for I’m not sure what, but they are the people who handle both telecommunications and electricity. The address I’ve found on the internet turns out to be outdated, but the new location is also within in walking distance. My research has indicated it will be fairly simple to buy a sim card with pre-paid minutes if I have an unlocked GSM phone, and this happily turns out to be true. By nine-thirty I have a local phone number and a hundred minutes, and am feeling very productive and super-satisfied with myself for having bought the phone on E-bay before I left the states.

I make my way to the theatre--which is a gorgeous old building. 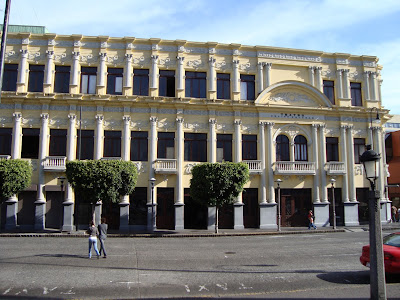 I walk back past the stage, where lights are being focused, and downstairs to find the production office --a printer and a lap-top computer set up in one of the dressing rooms. I’m introduced to Silvia—who does indeed speak very good English.

“So I hear you are my translator for my workshop.”

She looks at me blankly. “When is it?”

“I thought I had to do something else then, I’ll check with Horacio.”

She runs out—she’s carrying a clipboard and seems to have a lot on her plate. Although I've been a little worried before, this is the point at which I start to suspect for real—that the whole idea of translator might fall through. That’s too heavy to think about so I turn my attention to Michaela, who H has assigned to make signs for each of the dressing rooms. He wants each one to have a little phrase that speaks to the performer, like “you ride the spirit of woman.” He waves his hands around as he says this, and people nod. I wonder if I'm just conservative or not in tune with my feminine side that these things sound rather vacant, but I nod too and say I'll help with the English speaking groups from from Norway and Nashville.

Before noon, H and I walk to my hotel, where I pick up my bag and take it to Hotel Presidente. The lobby is full of women and girls who have just arrived on the bus from the CaribbeanI see my friend Rachel, who I know from L.A. and ask if I can put my bags in their room—which is fine with her, except that the rooms aren’t ready yet.

The various groups of women who were traveling together scatter to eat and rehearse. I decide to hang out in the lobby. I have a feeling if I go back to the theatre I’ll get swept up in whatever project needed doing—which normally I’d be happy about, but I think I need to try an experiment: I take my first set of bullet points for my lecture and type full paragraphs. Then I translate the document with Google Translate and take a look.

Not great though either—pronouns are wrong and “plot” is translated to parcelo. On intuition I looked the word up in my battered 20-year old dictionary. It refers to a plot of land, not a story plot.

I have my work cut out for me. But I can tell that it’s much superior to anything I’ll be able to say on my own if I walk into the lecture room and there is no one to translate. If there is a translator however, this will be a huge waste of time, and doing this will take all the time I was hoping to use to rehearse the English version. Sigh. Am I making the right decision? I never know. But my fear of debaucle is greater than aspirations for greatness. I start typing.

Another woman waits with me in the lobby. Megan is a photographer from Canada. Like me, she’s come as an individual, and since she doesn’t belong with any group and H is so busy, seems a little lost in the shuffle. I ask if she’s staying at the hotel, and she says she doesn’t know. She stayed at H’s house when she first arrive, and her clothes are there. She mentions that H had said that she wouldn’t have to pay for anything in Costa Rica—a familiar story!—and that she is already running short of funds. I say that Tattiana had said something about all the women going to her place that night, so maybe she’s with us.

I take her to a corner soda and show her the magic of the cheap and plentiful casado. Toward we walk to theatre so she can organize how to get her things at H’s house. Michaela is still struggling at the computer—she’s now been tasked formatting the programs for the evening’s show—even as the guy from the print shop waits at the door! A side skill that comes with learning to write for years on end, is some facility with Microsoft Word. I manage to quickly make two sloppy columns so that the sponsor logos will fit—which of course is the main concern, and we print it up.

For reasons I don’t understand, even though she’s been staying with Tattiana, Michaela’s clothes are also at H’s, so she and Megan are going there to change. I walk them back as far as the hotel, trying to understand the plans for the evening. I know that Michaela and a woman named Coral have to be back in town early in the next morning, and the evening will end late, and with luggage in two different places and nobody with a car—how are we all going to Tattiana’s and getting back in the morning? She laughs and says she thinks that probably no one will be at Tattiana’s that night, that she and Megan will probably stay with H again, and maybe I can too.

This all seems very hypothetical, so when I get to the hotel room, I offer to pay Rachel and her roommate Gabrielle, to share with them, and they generously agree.

As we dress for the evening, Rachel gives me a brief overview of the weekend. Apparently many of the scheduled workshops that were supposed to happen in the Caribbean never occurred. The women and their charges—fourteen teenage girls-- had waited around through multiple schedule changes instead of enjoying the beach, only to have many of the events disappear entirely. The glamorous Caribbean Feast that had been promised turned out to be more chicken and rice and beans, and the intercultural exchange between the girls and the girls of the village was attended by only the two daughters of the hotel owner, rather sullen and sulking—forced into it at the last minute. H had been supposed accompany them, but since he was busy at the last minute he had put Coral—a girl from Spain, who spoke both Spanish and English, but who had only been in the country for a few days, in charge of the expedition, which had put her in the awkward position of having to deal with money issues for the group that were supposed to have been worked out previously. Thus there was some question as to whether they wanted to return to the same place after the festival. Rachel and Gabi rush out, as their girls were performing, and I stay behind to dress more leisurely and, of course, add a few pages to my lecture for the next day.

That night the show somehow actually begins at 8:10, a reasonable start time for theatre anywhere. There are a series of little speeches by community figures and politicians of which I understand little, but the performances are all entertaining and well received by the audience. Although the all 900 seats are by no means filled, the attendance is reasonable. The performance is a success.

Afterwards there is no talk of a gala party on the stage, but H invites me to go with the performers went to a restaurant. I sit upstairs with the dancers from Norway, and get to know them a little. Tine is a red-head who splits her time between New York and Oslo. Nina is sharp-tongued and attractive, and gives me the impression that she has things she would rather be doing than hanging out with me, but I like her nonetheless. H arrives and beneficently announces that our meals were paid for, although alcoholic drinks. For the moment, after the long evening, our large table is more concerned with just having glasses of water. After 20 minutes for water, Nina says she would like to go get the water herself. This is something I often feel, but rarely am brave enough to do on my own, so I offer to help, and we go down the kitchen and demand glasses of water from the bemused workers, which we carry to the dozen people table upstairs. The restaurant seems not prepared for our party, and it takes an hour for the food to arrive. By the time it does we are exhausted, and have exhausted our conversation as well. When we’ve eaten, we don’t wait for a bill, but descend the stairs, and check in with the cashier as we exit. I hadn’t had alcohol, but thought I should offer to pay for food since the offer might just have been for the performers. The man at the register waves his arm, and says it applies to everyone. Great. I ‘m on my way to bed and sleep. But as we stand on the street, looking for a taxi at 1a.m. We see Megan and Micheala looking despondent. H has just told them they could not stay at his place after all, and they would need to get a hotel. I’m stunned. Since I’m already staying on the hospitality of others, I can’t invite them to our room myself—but I tell them to talk to Rachel and Gabi, who I’m sure will say yes. The others are waiting in the cab, so I go with them, feeling bad for the two women.

Rachel returns to our room later and says that the three women had decided to get a room, so that’s good. But she has another shocking report. After the meal, Horacio told Vali, who is in charge of Rachel’s group, that she was expected to pay for herself and the girls. “But I had heard the meals were paid for,” she’d said.

“No, you have a budget, you pay what is in your budget.”

Since Vali had already bought dinner for the girls before the show, and had only come to the restaurant because she thought it was a celebration, this put her over budget, and made everyone feel weird to boot.

Posted by Barrington at 9:29 AM